Komuso is my online musician virtual alter ego (or Avatar), born in SecondLife in 2005 where I was one of the first musicians to start performing live music streaming to virtual audiences.

If I had to describe my style in a short sentence I’d say it’s all about Groove, Tone, and Story.
(even instrumentals can tell you a story…)

Update Aug 2020: Interview on the SecondLife blog An Interview With Komuso Tokugawa

“The blues is the human condition, Blues is life or truth as has been said, and encompasses the whole spectrum of human emotion from despair to joy.”

One of my fans wrote this about me which I think describes my style best:
“Komuso Tokugawa’s approach to the blues is unique. The rough-around-the-edges sound is often described as ‘dirty’, ‘grungy’ or ‘alternative’. Highly experimental, Komuso takes influences from world music and wraps them around the emotionally charged blues core to create his sound.”

Another fan’s view:
“Komuso plays the blues the way it oughta be played, with an edge and a throatiness that tells its own tales.“

You can hear some of these musical explorations on Soundcloud:

You can hear some of these musical explorations on Hearthis:

You can also virtually see/hear them in projects such as my Spatial Music Visualizer.

Real music for a virtual world is an article from 2009 that explains a little about the virtual world music scene in SecondLife. Live Music has long been the “Killer App” of the SecondLife online social experience, acting as the glue that binds people to come together for shared experiences. I’ve produced and performed at 1000+ events in SL and have learned a lot over this time in areas as varied as event production, set production, streaming audio/video, platform economics++. Read more at Project – Online Live Music

What do I play?

I sing and play slide guitar mainly (with a dose of finger style and pick), Harmonica (mainly in a rack), Shakuhachi, and electronics of different types via different control interfaces. My main guitar is a currently a Steinberger Synapse Transcale ST-2FPA (my backup is a Hohner G3T headless since ~1991), and I play mainly Suzuki Manji & Lee Oskar Harps.

I’ve busked in Europe, UK, Alice Springs and played in a few bands from Oslo to Tokyo. My favorite memories are when I spent nearly a year busking on Las Ramblas in Barcelona in ’91. The ever changing Bottleneck Blues band in Tokyo was a lot of fun too.

I’m deeply interested in music technology and new music genres across all boundaries. I’m also a producer/developer of educational apps such as Fopra and the benchmark Harmonica training app HarpNinja. As a Creative Technologist I also work with many different technologies across many different areas.

I’m currently exploring new areas in music and sound with VR/AR/MR and spatial audio/music with various projects and collaborations, such as:

Generative music systems are an interesting area that I’ve done a lot of research and experimentation in as well. I’ve spent a few years virtually busking in virtual worlds like SecondLife playing solo (with and without my robot backing band) and also real time music jamming with multiple musicians located in different countries.

Moozk was an experimental audio visual app I developed for public use using a wacom pen tablet to drive a painting application that also produced generative music as you drew. Kids seemed to love it.

I’ve given some talks and performances about live music in SecondLife:

. Mixed Reality Komuso On The Future of Music Online

Where did the name come from?

When you registered for SecondLife they gave you a list of last names to choose from, but you could choose your own first name. At the time I was learning Shakuhachi,  a traditional end blown Japanese Bamboo flute played by Zen monks known as Komuso, so I chose Komuso as my first name as it resonated with a few things I was working on. The Komuso had an interesting history during the period of the Tokugawa Shogunate so Tokugawa seemed like a good choice as a last name.

I designed a custom avatar to represent Komuso in the virtual world, kind of a voodoo shaman cyborg hybrid I call “Komuso the BluesBorg”. 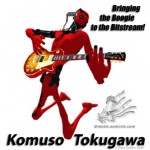